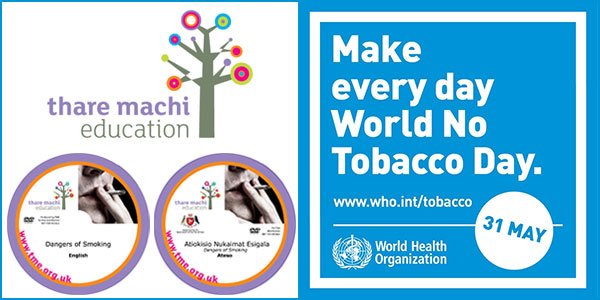 Did you know that 80% of smokers live in low to middle income countries? Or that smoking can trigger communicable diseases such as tuberculosis?
Thanks to widespread advertising and strong public health campaigns, the harmful effects that smoking can have on health, wellbeing, and finances are well known in many parts of the world.

However, while tobacco smoking is reducing in Western countries, consumption is rising in low to middle income countries, and is fast becoming a serious threat to global health and international development.
Tobacco companies have set up shop in Africa and Asia, taking advantage of the lack of tax and advertising restrictions and targeting the 700 million young people, laying the groundwork for serious long and short-term health and economic issues.

This lesson, ‘Dangers Of Smoking’, is used in vulnerable communities to teach the dangers of smoking and the harmful effects it has.
Many communities are currently unaware of how smoking can cause cancer, strokes, respiratory problems and infertility, so TME empowers them with information to make informed decisions about their health. The lesson also explains that smoking whilst pregnant seriously harms the baby, and that smoking around children is also dangerous, causing 165,000 under 5s to die every year.
The viewer is provided with key facts to help them understand that stopping smoking can reduce the risk of illness for themselves and their families, and leave them with more money and better wellbeing. TME’s approach has been highly effective at creating positive behaviour change. Evidence shows that once people have the right facts, they begin to make informed decisions to better protect themselves from harm.

“Before I was a true smoker, and I could not know it was bad. I used to smoke because all the men here smoke. After I had watched the people in your stuff there, I learned that tobacco is harmful to our health.” – Iragi Michael, from the Democratic Republic of Congo.

Tobacco use is rising in low- and middle-income countries, posing a serious risk to public health and economic growth.
As there has not been the same level of public health campaigns, taxation and sensibilisation, many communities are not aware of the negative effects of smoking. The WHO estimates that if smoking rates increase at the same pace, by 2030 80% of death caused by tobacco will be in low- and middle-income countries.
This is a serious issue that we need to address imminently, as many tobacco-related patients will not have access to expensive medical resources, and it is certain that poor communities will be the first to suffer, dying painfully and prematurely and leaving their families without income.
On World No Tobacco Day, we are imploring that people understand the serious danger that tobacco poses to the developing world.

The Dangers of Smoking DVD is available in 29 languages. The lessson: – Teaches the dangers of smoking and the effects it can have on a person’s health and the health of those around them. – Teaches how smoking can cause cancer, strokes and infertility. – Teaches the importance of not smoking when pregnant and around children as it can affect their health as well. – Encourages the viewer not to start smoking due to peer pressure and to avoid passive smoking. – Encourages viewer to stop smoking and discusses how it can help reduce the risk of illness as well as allow them to have more money and lead a healthier lifestyle.

Find the Dangers of Smoking DVD in your language